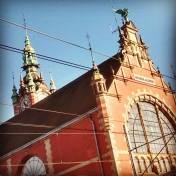 As you may have noticed already, it usually takes me a few weeks or even months to reflect on the events that I attend, and my comments mostly refer to the conference/workshop content, as I try to focus on men and masculinities and/or gender issues that are discussed during the event. This time, however, is slightly different because not only did the conference end six days ago, but I am also changing my focus from the content to the interactions that I observed. So let me start with the basics.

Between the 14th and 17 th  of September, I took part in the XVI Polish Sociological Association Congress held at the University of Gdansk, Poland, which is organized every three years in various Polish cities. I’ve been presenting my research on these particular events since 2007, but for the first time I had the pleasure of serving as a working group co-chair. Two of my colleagues and I organized a group entitled “Gender trouble: from masculinities’ (re)production to gender transgression” dedicated to the discussion of 1) gender transgressions and 2) men and masculinities issues. However, my personal engagement in the working group’s organization and paper selection process preclude my usual “quality check” with regard to the men and masculinities presentations and discussions, and this is one of the reasons why I will skip the content part of the congress. Let me just say that the second theme of our group discussions gathered a large number of participants. Every seat in the room was taken; we needed to organize extra chairs and I hadn’t seen such a crowd for any other working group that I’d attended in Gdansk. 😉

And that would basically be all in terms of positives, as the rest of the congress, its organization and most of all, types of interactions between participants, chairs and presenters, as well as organizers, have aroused mixed feelings that started immediately after my arrival. It had been two years since my last attendance at the conference organized at the Polish university, and I must admit that the time I’ve spent in Swedish academia has had a significant influence on me. I was really astonished by the level of ritualization of interpersonal relations among Polish academics. All this “Dear Professor X!”, “Distinguished Dr Y”, “This is my beloved friend, Dr hab.[Associate Professor] Z” etc. reminded me that I used to belong to these highly hierarchical milieu and that nothing has changed in terms of the structure of Polish academia where so called “titlemania” is very prominent. Sure, there are countries where such culture is equally strong (Germany) or even stronger (Austria) but there is one important detail that distinguishes Poland from these two countries. This detail is gender. While taking part in several working groups and panels I noticed that many chairs had the tendency to use the academic title and affiliation to introduce male participants, while in the case of female presenters, the name alone was usually enough. This was the case in the working group where my research was presented. The first male participant was introduced (by two male chairs) as Professor V and I had a chance to find out the name of the university where he works. Unfortunately, neither I nor the other 2 female sociologists with PhD titles (and one with an MA title) were lucky enough to be introduced in a similar manner. We were Ms. W, Ms. X and Ms. Y and the last person was called by her first name only. This was a consistent pattern during discussions with Professor V and four ladies. A similar situation took place during the informal part of the congress where PSA chairwomen publically mentioned congress organizers, calling organizer that is male Professor A., and organizers that are female by their first names (despite the fact that both have PhD titles). After years spent abroad, it was incredibly striking to me that the Polish academic culture is still so deeply entrenched in such a patriarchal structure where status designators are only worthy of use for males while the status of the female scholars, if not intentionally ignored, is marginalized, mostly by male but also female academics.

Another striking situation took place during the working group that I co-chaired. While the first part of the group on gender transgressions, among 18 participants (presenters, chairs and audience) there were 3 men. Quite a typical situation for the gender-oriented events I agree, but this time the behavior of one of the men was highly atypical for (gender-oriented) events and, I’m afraid, rather typical for others. At the beginning of the discussion, one of the male participants, let’s call him Mr. D, decided to give his feedback starting with the statement “I don’t have a clue about the topic but let me tell you that…” In my opinion, not having a clue (about men and masculinities theories or research for instance) is not a sin and participation in a working group like ours can be very beneficial for such people who can simply ask their questions and learn something new. Unfortunately, that wasn’t the case with Mr. D. After his entry line, he started to share his thoughts with us about gender relations, about the fact that society needs gender binarism, about his experiences with regard to everyday male-female interactions etc. He did not ask questions, and was set on hearing his own voice exclusively. He was clearly not interested in the group’s findings, ignored the expertise of all presenters, barely acknowledging their existence (well, except for the moment when he…started answering the questions that was addressed to one of them!) and his performance was a textbook example of mansplaining defined as “[not] just the act of explaining while male […]. Mansplaining is when a dude tells you, a woman, how to do something you already know how to do, or how you are wrong about something you are actually right about […]. Bonus points if he is explaining how you are wrong about something being sexist!” (Husson 2013). Moreover, it was hard to stop him as he wasn’t afraid of accusing chairs of “interrupting him” and as a consequence, he wasted a significant amount of time that was allotted for the discussion of the highly interesting papers.

The last manifestation of menferencing, which I define as a type of a communication structure at a conference (or any other public event) where male status designators as well as voices and opinions are appreciated and promoted while females are marginalized and belittled, was a public discussion panel where only male participants were invited to take part. The panel was dedicated to the discussion of sociology in the public sphere and, apparently, in a country where sociology can be studied at tens institutions of higher education, there are zero female sociologists that would have something important to say about it. Luckily, that was the only male-only panel at the congress and its composition was immediately criticized by the audience. That gives us all a hope that in the future such a situation will not happen at the PSA congress again and that in the meantime, some of the participants and organizers decide to sign a pledge “I will not be part of male-only panels” ever again.

Another positive menferencing outcome was the strategy on how to handle mansplaining during a discussion in the working group. My group’s co-chair and I decided to structure the debate so that until all questions from the audience are answered, there will not be time for comments or general feedback. The strategy was incredibly successful as Mr.D, who had a plenty of comments to share and zero questions to ask, had to wait for “his” turn till the end of the discussion, which shaped only by questions and answers, was extremely fruitful and inspiring. The time ran out pretty quickly and Mr.D left the room in silence, unsatisfied.